In the late nineteenth-century, American learned societies sought to catch up with their European counterparts in the study of "Biblical archaeology." One of the first scientific expeditions launched as part of this effort was funded by Catherine Lorillard Wolfe (1828-87) and staffed by J. R. Sitlington Sterrett and John Henry Haynes, together with William Hayes Ward (1835-1916) and Daniel Z. Noorian (1865-1929). The four men set out from Mersin in October 1884 and traveled east via Mardin, Mosul, and Erbil to Baghdad. A second leg of the journey led through southern Mesopotamia, while the return trip in the spring of 1885 led back west through Syria, including a stop at Dura Europos and an especially productive five-day stay in Palmyra.

Haynes, the expedition's photographer, had learned his craft in Athens from William James Stillman (1828-1901), whose picturesque approach to ancient architecture he adopted. Haynes also developed a keen eye for scenes of daily life, as witnessed by his fine view of weavers at work in the Iraqi town of Anah. 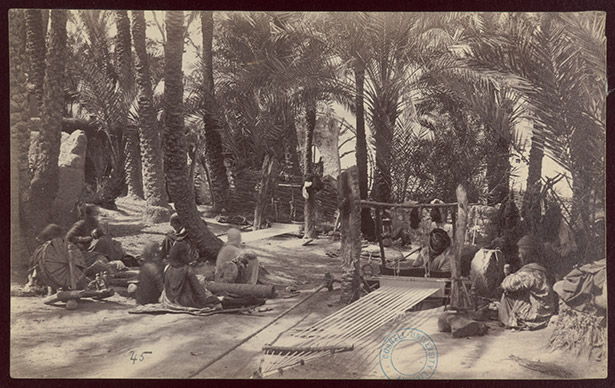 Cornell may hold the most complete set of Haynes's photographs from the Wolfe Expedition. Many are numbered on the print, but the key has been lost. The subjects of some may be identified by the monuments depicted, and others with reference to Haynes's journal, which is preserved in the archives of the University of Pennsylvania Museum of Archaeology and Anthropology. The remainder speak to us today primarily as evidence of Haynes's unique vision.

Browse photographs from the Wolfe Expedition